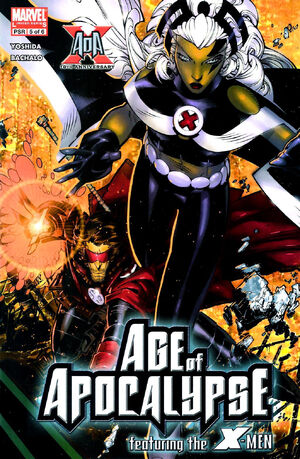 Weapon X forces Magneto to come clean; he says that he saw the flaming phoenix emblem in the flash of light when the bombs stopped, and decided to accept that the world saw him as its saviour. However, Mr. Sinister came to him, and Magneto realized that he knew the truth as well. Sinister had taken Jean's body from the grave Magneto had put it in, but he told Magneto to leave him alone, or else the truth would come out, that the man the world believed saved everyone had done nothing. Weapon X takes a scent off of Husk's body and deduces that Sinister is in New York City. He also smashes Magneto's helmet, telling him that he has to stop hiding behind his mask if he wants people to trust him. Sinister had set up in one of his old labs, but when the X-Men investigate, Cloak teleports them outside, where Sinister and his "Sinister Six" await them. Sinister states that his plans are not about genetics and genocide, and tells Weapon X that Jean Grey is alive and well, and introduces her as a member of his Sinister Six (five of the Sinister Six appear on-panel: Cloak, Dagger, Sonique, Sauron, and Phoenix).

Retrieved from "https://heykidscomics.fandom.com/wiki/X-Men:_Age_of_Apocalypse_Vol_1_5?oldid=1470220"
Community content is available under CC-BY-SA unless otherwise noted.