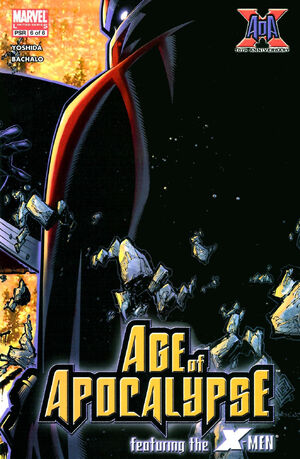 The X-Men confront Sinister's Six, and Magneto demands to know why Sinister did what he did. Sinister responds by telling him that he sought Mutant Alpha, whose genetic code gave rise to all mutants, and he believes that Jean Grey has the powers of Mutant Alpha. He commands his Six to destroy the X-Men. The last of the Six appears on-panel; a mutant apparently combining the seismic powers of Rictor and the invulnerability of Blob. Samurai knocks out Sonique, Cloak swallows Nightcrawler, Dazzler, and Gambit within his dark dimension. Psylocke fights Dagger until Magneto drops a pile of debris on her, and Storm forces Cloak to spit out Dazzler and Nightcrawler. Quicksilver saves Magneto from Sauron at the cost of his own life. Magneto takes up Samurai's sword and kills Sauron. Sunspot and Phoenix battle with their own mutant flames, and Weapon X tries to reach out to Jean. When she falters, Nightcrawler teleports Psylocke behind her, and she stabs her in the head with her psychic knife. Magneto orders Weapon X and Kirika to finish Sinister off. Nightcrawler was unable to rescue Gambit from Cloak's darkness, and Jean admits to being responsible for organizing the Sinister Six. Kirika asks Psylocke to use her knife on her, and unlocks her memories; she is the actual daughter of Weapon X and Mariko Yashida. Magneto turns himself in, admitting that he lied about saving the world. Jean talks to him in prison about how hard they worked to redeem themselves in the humans' eyes. Kirika and Silver Samurai leave the X-Men, who will continue to follow the dream.

Retrieved from "https://heykidscomics.fandom.com/wiki/X-Men:_Age_of_Apocalypse_Vol_1_6?oldid=1470222"
Community content is available under CC-BY-SA unless otherwise noted.