Part of the 'Battle of the Atom' event 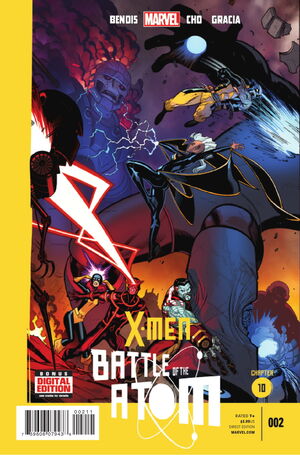 Appearing in "Battle of the Atom, Chapter 10"Edit

The cover lists Frank Cho and Marte Gracia as credits, although Cho did not do any artwork for this issue, while Marte Gracia only did colors for the cover. Chances are their names were mistakenly put on the cover because they worked on the first issue. It can most likely be assumed that Ribic and Camuncoli would have been listed on the cover if this error had been fixed.

Molly Hayes and Ice Thing were absent from the panels in that issue, and their fate is unknown.

Retrieved from "https://heykidscomics.fandom.com/wiki/X-Men:_Battle_of_the_Atom_Vol_1_2?oldid=1757599"
Community content is available under CC-BY-SA unless otherwise noted.