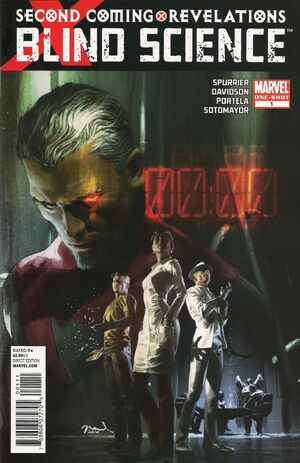 In the name of progress, justice and not being haunted by the pissed-off astral echo of an aging genius -- you will finish what we started. Do. Not. Flake! ... Ha! Invisible, is it? Science-gaze sees all, Brainfail! There will be crotch-punching!

The X-Men are on the ropes, barely dodging a foe whose master plan has them fighting to survive. Discovering some suspicious activity just off the coast of their refuge, Utopia, the X-Men send their best and brightest to investigate, hoping to discover just what Bastion is plotting. However, the X-Club is in for more than they bargained for: namely, a trap designed just for them. Thrown into a war even worse than the one they’re coming from, the X-Club is left to wonder: How do they get back to the X-Men? And just how do they figure into Bastion’s master plan?

Retrieved from "https://heykidscomics.fandom.com/wiki/X-Men:_Blind_Science_Vol_1_1?oldid=1470248"
Community content is available under CC-BY-SA unless otherwise noted.