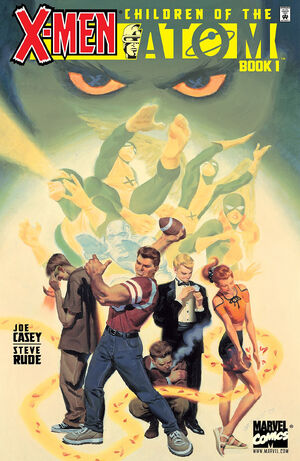 Mutanity is a plague. But plagues can be destroyed. And that destruction... is also our right. Our destiny.

Agent Duncan of the F.B.I and his boss are watching a news report about mutants and William Metzger, who is the leader of the Anti-Mutant Militia. Afterwards they discuss the topic of mutants and Duncan is told to do some research on the topic. When he gets to his office, Duncan discovers Charles Xavier is in there as well and the two discuss about the F.B.I's real intention of handling mutants. Meanwhile, Warren Worthington III is putting on his vigilante costume and is patrolling New York City when he notices a mugging at knife point. He stops the mugging and drops the mugger onto a police car. Later Xavier is having a talk with John and Elaine Grey about taking Jean Grey to a private school. At Freeport High School, Starkey, Chad and some others are talking about going to Metzger's rally when Hank McCoy walks past and they talk about how looks like he could be a mutant but he is untouchable due to his status as the school's football star. Meanwhile, Xavier, under the alias of Mr. Alexander, is in the Principal's office talking with him about a job application at the school. At the same time, Scott Summers is walking into the school and manages to trip over a gym teacher. In a class, Chad and Ruben talk about Bobby Drake, who looks frozen despite the air conditioning being broke in the middle of a heatwave. At dinner Starkey and co talk about Scott and but Hank goes up to him and compliments about the book he's reading. Later, Xavier is back at his mansion and uses Cerebro. At the Metzger rally Starkey and his friends eagerly listen to Metzger's anti mutant message and Xavier watches from afar. Back at the F.B.I building, Duncan is told about Bolivar Trask while, in another place, Starkey, Chad and Ruben are told about the initiation to get into the Anti-Mutant Militia. Meanwhile Warren is on another patrol of the city when a sentinel robot appears and attacks him. Warren tries to escape from it when it inexplicably explodes. Warren flies away and Magneto watches on in the shadows.

Retrieved from "https://heykidscomics.fandom.com/wiki/X-Men:_Children_of_the_Atom_Vol_1_1?oldid=1470252"
Community content is available under CC-BY-SA unless otherwise noted.