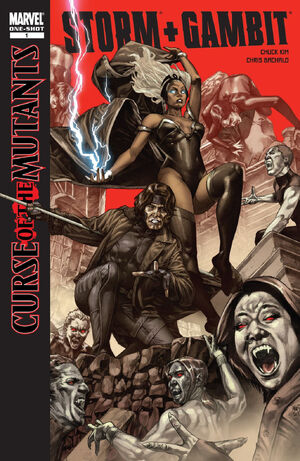 As an army of vampires descends on San Francisco, the X-Men find themselves in dire straights. The good news is that they may have just discovered a means for stemming the invasion. The bad news? What they need is in the clutches of the vampires themselves. Luckily, the X-Men have two thieves in their employ that may just be able pull off such a heist. Hold on to your wooden stakes, X-Fans…STORM and GAMBIT are in for a bumpy ride!

Retrieved from "https://heykidscomics.fandom.com/wiki/X-Men:_Curse_of_the_Mutants_-_Storm_%26_Gambit_Vol_1_1?oldid=1727974"
Community content is available under CC-BY-SA unless otherwise noted.