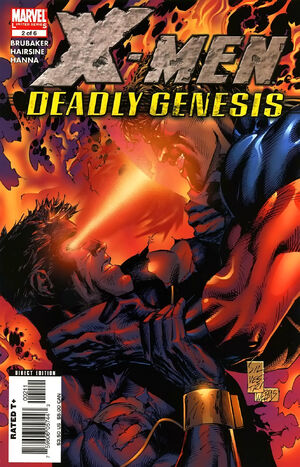 Armando Muñoz had a cruel mother who blamed him for his father leaving them. He was born with unusual features and when he was only 8, his IQ tested off the charts. Armando was offered an education at many prestigious boarding schools, but his mother enrolled him in Biltmore Academy; where he spent most of the next nine years. Armando was praised by teachers and tormented by the other students. It was this bullying that brought about his mutation. When Armando's head was submerged in a toilet bowl, he pulled himself from the water and subconsciously turned his hands rock-hard; exacting his revenge on his bullies. Armando ignored the incident but when his mother set the house ablaze, he picked her up from the ground and walked through the fire and smoke with ease. Word got around, and after extensive testing, the scientists at Biltmore deduced that "Darwin, the Evolving Boy" was a mutant, in a constant state of evolution. His mother disowns him, and this drives Darwin to jump off the roof of his school. To Darwin's surprise; his body grows lighter, his bones grow soft and he gently lands on the pavement. Later that day, a woman who is interested in helping "kids like him", arrives at the Academy to take him away.

Retrieved from "https://heykidscomics.fandom.com/wiki/X-Men:_Deadly_Genesis_Vol_1_2?oldid=1725259"
Community content is available under CC-BY-SA unless otherwise noted.