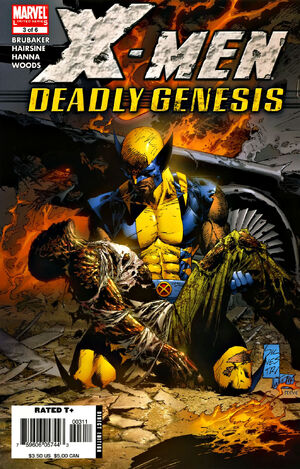 Sway's parents were killed by some gangsters but her powers stopped the bullets from hitting her.The police ask her what happened and she tells him,she and her parents were caught in the middle of gang-warfare near a college that she was trying to convince her parents to let her go to.The bullets had stopped when she sub-consciously froze time within a short radius.The police put her in a hospital for 2 days.When she left she was on her own and she continued to see ghost images of people and she learned about her powers.She hunted the gangsters down and froze them with he powers so that the police could get them.She talked to a detective about how she survived when her parents didn't.She was approached by Moira Mactaggert who asked her if she had heard of the X-men.

Retrieved from "https://heykidscomics.fandom.com/wiki/X-Men:_Deadly_Genesis_Vol_1_3?oldid=1648968"
Community content is available under CC-BY-SA unless otherwise noted.