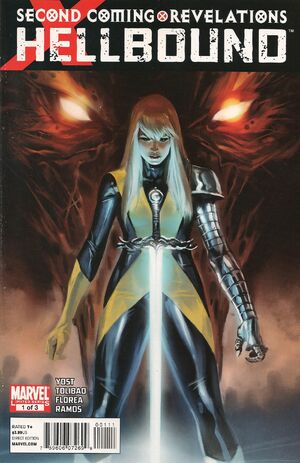 Fighting for the future of mutantkind, the X-Men are locked in battle with Bastion, staving off his forces even by sacrificing themselves. When Magik is gravely injured in battle, she instinctively flees to the sanctuary of Limbo…only to fall into the clutches of a longtime adversary hoping to wrest the powerful Soulsword—and control of Limbo—from her grasp. Now, a small team of X-Men venture in after her, but they are met only by unexpected peril: a horde of demons out for blood, Magik nowhere in sight, and a concealed evil walking amongst them.

Retrieved from "https://heykidscomics.fandom.com/wiki/X-Men:_Hellbound_Vol_1_1?oldid=1756928"
Community content is available under CC-BY-SA unless otherwise noted.