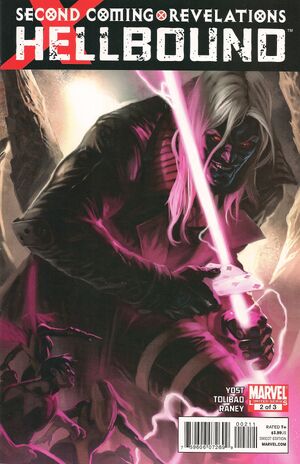 It’s the X-Men vs. DEATH—literally! With Bastion and his forces cutting through their teammates back on Earth, Cannonball and his team of X-Men know that they need to complete their mission and get back to the front fast. But that’s easier said than done; a trip to Hell never quite goes as planned. With Magik still nowhere in sight, the X-Men’s mission to retrieve her only becomes more complicated when one of their own is corrupted by Limbo’s influence.

Retrieved from "https://heykidscomics.fandom.com/wiki/X-Men:_Hellbound_Vol_1_2?oldid=1757476"
Community content is available under CC-BY-SA unless otherwise noted.