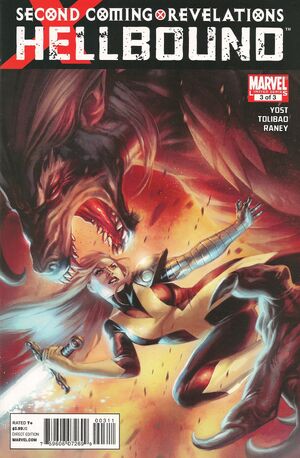 The exciting conclusion to this SECOND COMING Tie-In Series! While the future of mutantkind is in the balance back on Earth, a small team of X-Men fight the demons of Limbo for the fate of their teammate Magik. But with one of their own corrupted by the dimension’s dark influence and another of their number undergoing a change of heart, will Magik be able to emerge unscathed? One thing’s for sure: after this, things will never be the same…

Retrieved from "https://heykidscomics.fandom.com/wiki/X-Men:_Hellbound_Vol_1_3?oldid=1648298"
Community content is available under CC-BY-SA unless otherwise noted.