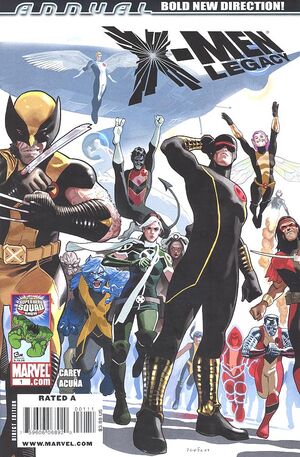 Appearing in "Devil at the Crossroads (Part 1)"Edit

Rogue takes over the driver’s seat of X-MEN LEGACY with a bang. But she’s not alone. Her new role with the X-Men puts her in close contact with the Legacy of the X-Men, the students. It’s up to Rogue to foster the last generation of mutants, but can she even keep them alive? A classic X-Villain returns in this giant-sized special that kicks off X-MEN LEGACY’s NEW DIRECTION!

Retrieved from "https://heykidscomics.fandom.com/wiki/X-Men:_Legacy_Annual_Vol_1_1?oldid=1770273"
Community content is available under CC-BY-SA unless otherwise noted.