Start a Wiki
Part of the 'Divided We Stand' event 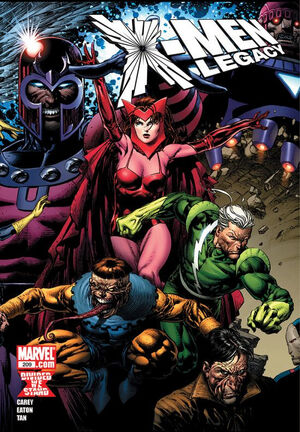 I am NOT your enemy. But if you force me to this, I swear I will destroy what's left of your mind.

Appearing in "From Genesis to Revelations, Part 2"Edit

Synopsis for "From Genesis to Revelations, Part 2"Edit

Magneto examines the operating table where Professor Xavier's body lies. He reflects upon how each of them have recently lost their single greatest asset: Xavier - the use of his mind; Magneto - the right to call himself a mutant. Karima Shapandar enters the room and offers to assist the comatose Xavier. With Magneto guiding her, she uses her nannite powers in an effort to heal Xavier's neural pathways. The process stimulates many memories in Xavier's mind, most of which involve past conflicts with Magneto and his Brotherhood of Evil Mutants. The process works and Xavier awakens.

The rest of the Acolytes have mixed feelings over Magneto's presence. Frenzy in particular wants nothing to do with him now that he is human. She also has no desire to see her fellow Acolytes save the life of their greatest enemy. Frenzy tries to kill Magneto, but Karima intervenes, much to her own lament. While Frenzy repeatedly punches Karima across the face, Magneto comes in from behind and fires a surgical laser into her eye straight into her brain. Frenzy falls to the floor blinded. Exodus finally enters the chamber. He has had enough of Magneto's presence and attacks him. Xavier has regained enough of his strength by this point that he can counter Exodus' attack on the psychic plane.

Retrieved from "https://heykidscomics.fandom.com/wiki/X-Men:_Legacy_Vol_1_209?oldid=1539354"
Community content is available under CC-BY-SA unless otherwise noted.