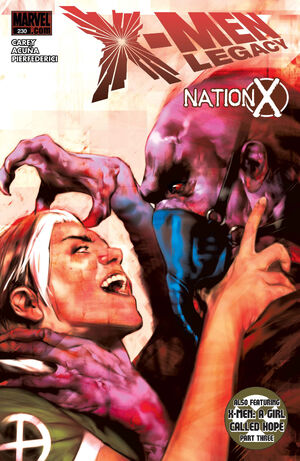 Appearing in "Devil at the Crossroads (Part 4)"Edit

It’s Rogue and Trance vs. Emplate -- a villain who has single-handedly taken down teams of X-Men A-Listers. Do they stand a chance? We sure hope so as X-MEN LEGACY #231 is on sale two weeks later! Don’t miss the killer climax to the huge first arc of the new direction on X-MEN LEGACY! Plus, a Cable backstory!

Retrieved from "https://heykidscomics.fandom.com/wiki/X-Men:_Legacy_Vol_1_230?oldid=1770274"
Community content is available under CC-BY-SA unless otherwise noted.