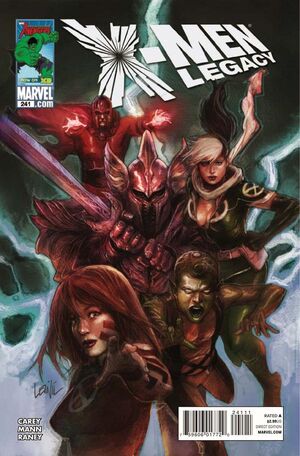 I've met men who think nothing of killing hundreds -- thousands, even -- to satisfy some abstract goal. ... I tried the other path, father. I could still hear the screams.

It all comes down to this. Rogue. Magneto. Indra. Anole. Loa. Five mutants stand between Mumbai and its utter destruction at the hands of the Children of the Vault. Will five X-Men be enough to save a city? Maybe. But one thing’s for sure: Victory won’t come without sacrifice.

Retrieved from "https://heykidscomics.fandom.com/wiki/X-Men:_Legacy_Vol_1_241?oldid=1470433"
Community content is available under CC-BY-SA unless otherwise noted.