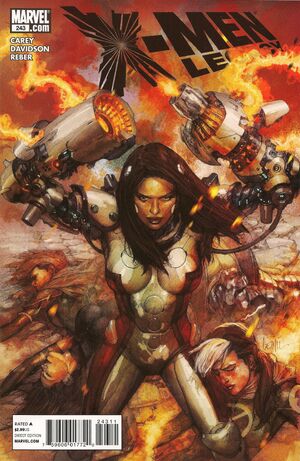 Appearing in "Fables of the Reconstruction (Part Two)"Edit

“FABLES OF THE RECONSTRUCTION” CONCLUSION! When the X-Men used an engineered virus to defeat Bastion’s army of mutant-exterminating Sentinels, they didn’t realize it would also compromise one of their own: Karima Shapandar, a.k.a. Omega Sentinel. With her reactivated Sentinel programming taking over, the X-Men find themselves in dire straits…and one X-Man may just cross the line in order to stop her!

Retrieved from "https://heykidscomics.fandom.com/wiki/X-Men:_Legacy_Vol_1_243?oldid=1650928"
Community content is available under CC-BY-SA unless otherwise noted.