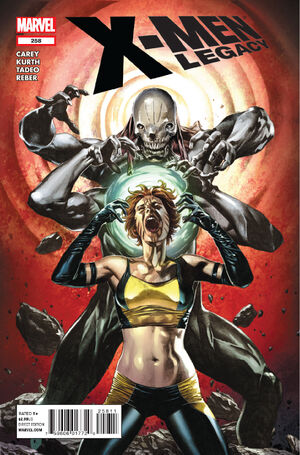 Appearing in "Five Miles South of the Universe" ConclusionEdit

'FIVE MILES SOUTH OF THE UNIVERSE' CONCLUSION! Locked in psychic combat with an extraterrestrial opponent who far outclasses her, and trapped on a space station that's hurtling toward an exploding sun, Marvel Girl finds herself in dire straits. With the lives of the station's inhabitants and her teammates on the line, just how far will she go to win the day?

Retrieved from "https://heykidscomics.fandom.com/wiki/X-Men:_Legacy_Vol_1_258?oldid=1731550"
Community content is available under CC-BY-SA unless otherwise noted.