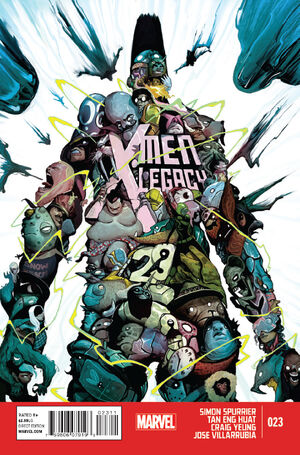 Appearing in "Slouching Towards Bethlehem"Edit

• War and death, nations turning against nations…the demonic shade of the deceased Professor Xavier that has been plaguing Legion’s psyche has escaped into the real world. What price will Legion pay to stop him from razing the Earth?

• And prophesied to stop Legion and imbued with the power she needs to do so, will Young X-Man Blindfold take matters into her own hands and extinguish her first love?

• One thing’s for sure: as this groundbreaking series races to its conclusion, anything is possible!

Retrieved from "https://heykidscomics.fandom.com/wiki/X-Men:_Legacy_Vol_2_23?oldid=1646467"
Community content is available under CC-BY-SA unless otherwise noted.