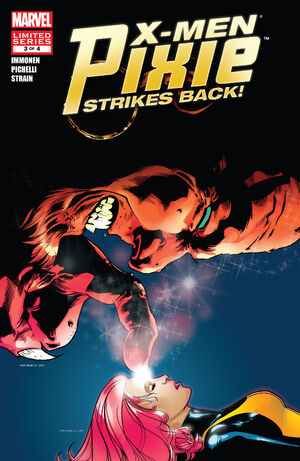 The illusion of high-school reality comes crashing down on Pixie, X-23 and the other X-Girls and it’s not pretty. They’re being held by a demon king who, shockingly enough, doesn’t have their best interest at heart. The X-Men are coming to save the day, but will it matter? The secret of Pixie’s parentage is out and no one will ever look at her the same way again.

Retrieved from "https://heykidscomics.fandom.com/wiki/X-Men:_Pixie_Strikes_Back_Vol_1_3?oldid=1649241"
Community content is available under CC-BY-SA unless otherwise noted.