Part of the 'Schism (Event)' event 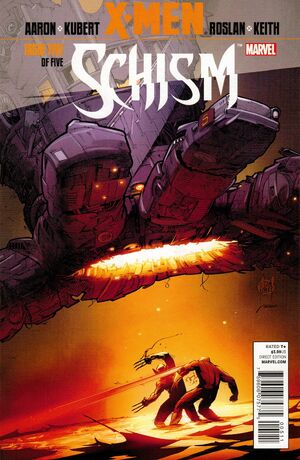 It all comes down to this! After years of fighting side-by-side the X-Men are torn irrevocably in half. On one side, X-Men team leader, Cyclops. On the other, X-Men mainstay, Wolverine. Between them lies the fate of mutantkind, and surrounding them, the foes who want to end them forever! Be there for the conclusion of the story that will set the stage for the X-Men universe for years to come, from Marvel Architect writer Jason Aaron and art legend Adam Kubert!

Retrieved from "https://heykidscomics.fandom.com/wiki/X-Men:_Schism_Vol_1_5?oldid=1757515"
Community content is available under CC-BY-SA unless otherwise noted.