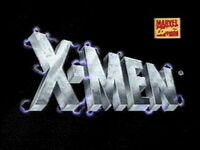 X-Men, an animated series, debuted on October 31, 1992 (the 1993–1994 season) on the Fox Network as part of Fox’s “Fox Kids” Saturday morning lineup, which featured cartoons such as X-Men, Bobby’s World, and Life with Louie, and live-action programming such as Power Rangers, directed at young children.

X-Men is Marvel Comics' second attempt at an animated X-Men program, after the ill-received half-hour pilot “Pryde of the X-Men” was broadcast multiple times between 1991 and 1992.

The popularity and success of X-Men, along with Batman: The Animated Series (which also debuted in the 1993-94 season), helped launch a number of 1990s-2000s animated series based on comic book series.

X-Men was one of the longest-lasting series on Fox Kids, and next to Batman: The Animated Series, its most acclaimed and successful to date. Despite its final new episode airing in late 1998 after 5 complete seasons, Fox did not remove the show from the line-up until 1998. The show is also one of the highest-rated and most-viewed Saturday morning programs in American history. During its peak years (1995 and 1996), the show was often shown weekday afternoons, in addition to Saturday mornings.

After the box office success of the X-Men movie in the summer of 2000, Fox began airing reruns of the cartoon on weekday afternoons. This ended in early 2001. Soon after, ABC Family and Toon Disney, due to Disney's buyout of all Saban Entertainment programs, began airing reruns.

The show features a team line-up similar to that of the early 1990s X-Men comic books, including Professor X, Cyclops, Beast, Jean Grey, Wolverine, Rogue, Gambit, Storm, and Jubilee. In fact, the line up largely resembles that of Cyclops' Blue Team, established in the early issues of X-Men vol.2.

Though they were not part of the X-Men team in the animated series, the following early ’90s X-Men characters all guest starred in at least one episode of the cartoon: Colossus, Nightcrawler, Forge, Banshee, Iceman, Archangel, Psylocke, and Bishop.

Initially only a few episodes were released on DVD, under the titles:

Starting in 2009, X-Men: The Animated Series was released on DVD as The X-Men: Marvel Comic Book Collection. There are 5 volumes, including every episode of the series.

Fox canceled the series in large part because the network did not like that Marvel Studios controlled their most popular animated series. Thus, they pulled the plug on both X-Men and Spider-Man animated series despite the fact that both received good ratings. Many fans predicted the series' cancellation because of the noticeable drop in the quality of the animation and story during the second half of the final season. Fox soon realized just how popular the X-Men animation series was when ratings dropped 31% after the network stopped showing it in heavy rotation.

The Mutant Resistance (in the Xavier-less timeline) 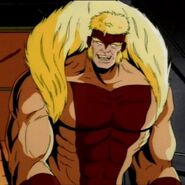 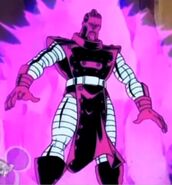 Children of the Shadow

Avengers (in the Xavier-less timeline)

The characters in the series were licensed by Capcom and were the inspiration for the video game X-Men: Children Of The Atom, which in turn would be the basis for the Marvel vs. Capcom series of video games. Most of the voice actors who did the voices in the series reprised their roles for the video game. Capcom would continue to use these characters long after the show was cancelled before eventually losing the rights to create Marvel based games to Electronic Arts in 2001.

The original opening animation introduces the main mutants using their mutant abilities to an instrumental theme. This intro is used for the first four seasons. Season 5's version features a remixed theme tune, and adds scenes taken from episodes, removing the character introductions.

In Japan, the opening intro was replaced with made over Japanese animation of the characters as well as a new vocal Japanese theme called "Rising" (ライジング, from the Japanese band Ambience (アンビエンス). An alternate anime intro was used for future episodes. (Note: the opening sequences were used for the 1990s version Japanese dub; there was no original anime adaptation of the series)