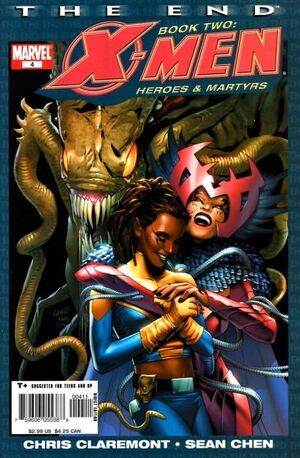 Appearing in "Heroes and Martyrs: Dance With The Devil"Edit

Synopsis for "Heroes and Martyrs: Dance With The Devil"Edit

People of Chicago, we're not about this. Not about this! The founding fathers gave us the means to effect change in our government, the ballot box. Like me as a candidate or not, want me as your mayor or not, that's where you take your action, and how you do so, by exercising your franchise! Not with a brick, or a dose of poison, or a gun! That's not the American way! You have a problem with me being a mutant? I gotta ask, why? What does that change about me -- wherein does is make us different? Except that maybe I don't have to open my door when I forget my keys, or race to get the bathroom. Hey, laughter is good. Laughter puts things in perspective. Fact is, I want safe streets in my hometown, same as you. I want my garbage picked up. I want a decent neighborhood and good schools. I want a place where I can raise my family. I even want a world series championship for the Cubs, but let's not be silly. These are dreams we all share, am I right? The only thing that separates us is an accident of birth. Me, I choose to embrace what makes us the same, what makes us all human. And from that common humanity, the need for community, and the desire to make that community a better place for everyone! That's why I'm running for mayor. Next Tuesday, make your voices heard in the way that celebrates the American dream and the American reality! Cast your vote! Bricks, we'll keep for building houses!
— Shadowcat (Making a speech after being hit with a brick).

The images of M and X-23 are switched.

Retrieved from "https://heykidscomics.fandom.com/wiki/X-Men:_The_End_Vol_2_4?oldid=1470734"
Community content is available under CC-BY-SA unless otherwise noted.