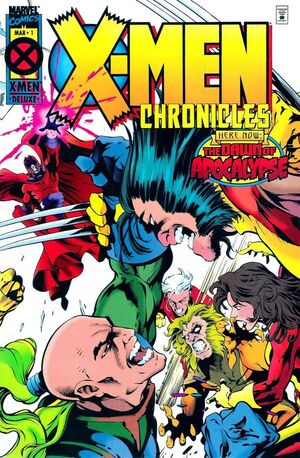 Weapon-X, right? Apocalypse thought about recruitin' you, but... decided to go for a winner instead!

Magneto has founded the X-Men to create the peaceful co-existence between humans and mutants. Due to growing hatred towards mutants, he has set up a special school located in Wundagore Mountains to train young mutants how to control their abilities. His X-Men are: Quicksilver, the Scarlet Witch, Storm, Colossus, Jean Grey, and Iceman. He joins them all in their training in the danger room and introduces them to their newest recruit, Weapon X. When Weapon X's berserker rage takes over Magneto instructs Jean to calm him down telepathically.

Meanwhile, in New York City, a giant ship has appeared, belonging to the evil mutant Apocalypse, who is making himself known to the world and beginning his edict of survival of the fittest.

Magneto leaves his students to meet his next new arrival, a young mutant named Rogue who has the ability to absorb the memories and talents of others through physical contact. She has absorbed the abilities of the mutant Polaris. She is brought to Magneto by Mystique who leaves the girl's well being in his hands. Magneto's X-Men enter the room, and when Iceman tries to make contact Rogue gets defensive, and Magneto calms her down.

Back in America, Apocalypse's ship is floating over Cape Citadel and his Horsemen are deployed to take control of the capes nuclear weapons. Apocalypse's horsemen are Sabretooth, Gideon, War, Death, and Candra.

Back at Magneto's school, The Scarlet Witch shows Rogue around the school, and Magneto tells her of Charles Xavier and how the X-Men are his legacy. They are interrupted when Quicksilver arrives to inform Magneto of the attack at Cape Citadel.

At the Cape, Apocalypse's horsemen are slaughtering the soldiers guarding the missile base, allowing Gideon to get to the control room and take control of the missiles. As expected the soldiers are no match the the group of mutants. As they enter missile command at Cape Citadel, they have no idea that Magneto is watching the whole ordeal via spy satellites. Seeing that the Horsemen made their way into the base, Magneto calls his X-Men together to face the enemy. As they prepare to leave Magneto leaves the Scarlet Witch to look over the school in his absence. As the X-Men leave their base they have no idea that the evil mutant Nemesis is making his way to it.

Back at Cape Citadel, Gideon begins working the computers as the X-Men arrive. Their arrival is noticed and their plane is destroyed, however the team survives the destruction of their jet and begins to engage the enemy.

At Magneto's school, Nemesis is laying waste tho the place killing all the students that stand in his path, until Rogue and the Scarlet Witch intervene. When Nemesis attacks Rogue, The Scarlet Witch manages to hit him with one of her Hex bolts. This shocks Nemesis because her attack actually hurt him, but he intends to make her pay.

Meanwhile back at Cape Citadel, Sabretooth comes to the realization that his teammates plan on actually using the nuclear weapons and protests. Apocalypse, expecting this, orders his Horsemen to execute Sabretooth. Candra restrains Sabretooth and they bring him outside leaving Gideon to arm the missiles.

Outside they are confronted by the X-Men. Sabretooth convinces Candra that they need him to help fight the X-Men and she sets him free. Sabretooth begins to fight Weapon X, and the two lash into each other with no restraint. While Candra attacks Magneto, Jean Grey intervenes giving Magneto the opportunity to enter the base and prevent the missiles from being launched.

When Magneto tries to stop Gideon from launching the missiles, he's caught off guard by Gideon's ability to mimic mutant powers and is pinned to a wall. Outside, the X-Men work together to defeat Apocalypse's henchmen. Storm defeats Death, Ice Man and Colossus defeat War, and Weapon X wounds Sabretooth by severing his spine. Apocalypse's ship slowly drops from the sky.

Inside the base, Magneto uses his mutant powers to overload Gideon and makes him explode, killing him. Apocalypse then tries to destroy the X-Men with his ships weapons, however Magneto rises from the rubble and uses his magnetic powers to save his students. Apocalypse and his troops make an escape.

Back at Wundagore, the battle is over and the school is trashed. Rogue stands over a severely injured Scarlet Witch, who in her last words tells Rogue to look after her father, then dies. Magneto comes home with his X-Men to realize that he has paid the ultimate price for his dream.

Generation Next
by Paul Smith

Retrieved from "https://heykidscomics.fandom.com/wiki/X-Men_Chronicles_Vol_1_1?oldid=1684390"
Community content is available under CC-BY-SA unless otherwise noted.