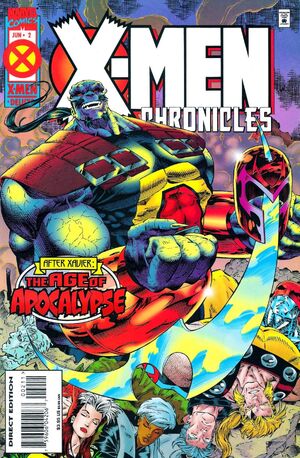 Rogue is in a love triangle between Gambit and Magneto. Magneto reveals he can use his magnetic powers to bypass Rogue's absorption.

During the battle with Wolverine, Rogue agrees to let herself die for Magneto, but Gambit is able to kill the assassin. Angry at her choosing Magneto over him, Gambit leaves the group.

The Transformation of Nemesis into Holocaust
by Jerry Bingham & Marie Javins

The Funeral of the Scarlet Witch
by Paul Smith & Matt Webb

Retrieved from "https://heykidscomics.fandom.com/wiki/X-Men_Chronicles_Vol_1_2?oldid=1687084"
Community content is available under CC-BY-SA unless otherwise noted.