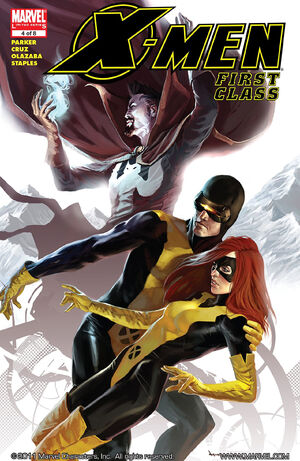 When the X-Men are battling a sentinel, Scott sees a demon-like monster, and shoots at it, but hits nothing. The other team members see nothing where Scott is hitting, but they defeat the sentinel nonetheless. The man who reprogrammed the sentinel has red marks on his arms only Scott can see. Professor Xavier sees that to find the source of Cyclops' sights, they must consult Dr. Strange. They call Dr. Strange, and take the train to Manhattan. Once they enter the Sanctum Sanctorum, Dr. Strange greets them, and examines Cyclops' visor and says that a demon has attached itself to him. He explains that the demon is from the realm of Cytorrak, and the way to enter that realm is through the ruby gem. Professor Xavier instructs his X-Men to put on the spare visors he brought and everyone sees the demon Cyclops saw, and dress for battle. Dr. Strange leads them through a portal to the realm of the creature, and see that Beast is standing on the creature, which captures Angel and Beast. Iceman freezes the creature temporarily, but it breaks out, and Cyclops' attack has no effect. Jean's power is much more powerful in that realm, and pulls open the portal to the realm of Cytorrak. Cyclops defends the portal, and Jean throws the creature in and closes it. They all go back to our realm and have tea.

Retrieved from "https://heykidscomics.fandom.com/wiki/X-Men_First_Class_Vol_1_4?oldid=1469735"
Community content is available under CC-BY-SA unless otherwise noted.