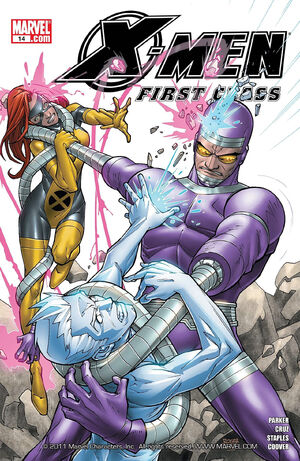 People have enough trouble with cognitive dissonance. Computers just don't do it at all.

After making contact with the lava men, the team (along with Machine Man) attempt to learn more about them. Along the way, Machine Man learns more about himself.

The credits for this issue do not list staff in the traditional manner. The actually listings are as follows:

The model of Machine Man in this issue is X-50, one iteration before the current model.

Retrieved from "https://heykidscomics.fandom.com/wiki/X-Men_First_Class_Vol_2_14?oldid=1469774"
Community content is available under CC-BY-SA unless otherwise noted.