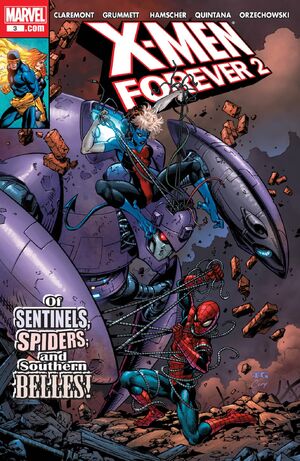 I saw and hear it, too, Kurt -- the barest hint of the Phoenix.

Appearing in "A Night on the Town!"Edit

Synopsis for "A Night on the Town!"Edit

In Manhattan, Mystique tries searching for her children, Rogue and Nightcrawler by asking a bartender. When the man refuses, she turns into a giant monster.

Elsewhere in Manhattan, Spider-Man asks a seeming stranger if she is related to Nightcrawler, because they have similar appearances. The "stranger" denies being Nightcrawler before teleporting to a nearby rooftop, and Spider-Man recognizes her voice as belonging to Rogue. Rogue explains that she had an "accident" to acquire her new Nightcrawler form. They hear a burglar alarm and decide to investigate together.

While the world believes the X-Men are dead, they are actually in hiding. They are still in the X-Mansion, but using special technology to make themselves out of phase with the rest of the world by just a second. To everyone else, all that is there is just a giant crater.

Using Cerebro, Jean Grey detects that Rogue has escaped the grid. In his office, Cyclops thinks about their decision to fake death to give them the freedom to move against the Consortium as they gain allies in S.H.I.E.L.D. Nick Fury and Jean tell Cyclops that since the Goddess Roma has cast a spell on Rogue, making her invisible to electronic detection.

In Trumbel, Alaska, Dr. Hanover asks Christopher Summers if she can rent a plane, all the while being monitored by Nathaniel Essex.

Spider-Man and Rogue patrol the city at night, taking care of criminals. As the sun rises for dawn, the two heroes sit on the rooftop eating some breakfast. Spider-Man urges Rogue to "follow [her] heart" when dealing with her new powers. Following his advice, Rogue almost kisses Spidey until they are interrupted as Rogue screams in pain.

It turns out that the interruption came from Jean Grey, who is trying to find Rogue by telepathically yelling at her. While she, Nightcrawler, and Shadowcat continue searching, Neo-Sentinels ambush them. Meanwhile, Mystique watches news coverage of Spider-Man's latest attack on crime and notices the blurred figure of Rogue.

The X-Men battle the Sentinels, but one Sentinel immobilizes Nightcrawler and prepares to attack. Rogue arrives to save her half-brother, and Spider-Man soon joins the fight. "Ziggy Trask" tells the Sentinels to stop, but they see through the deception and attack the impostor.

Jean uses the distraction to compress a Sentinels into a ball of metal. She explains that since she has locked the information of their fight inside the Sentinels. Kitty Pryde asks Spider-Man if he is going to talk about them, to which Spidey replies, "Talk about who?" The figure that aided them emerges from the smoke, revealing that she is actually Mystique. Mystique claims that she is there to join the X-Men.

Retrieved from "https://heykidscomics.fandom.com/wiki/X-Men_Forever_2_Vol_1_3?oldid=1555017"
Community content is available under CC-BY-SA unless otherwise noted.