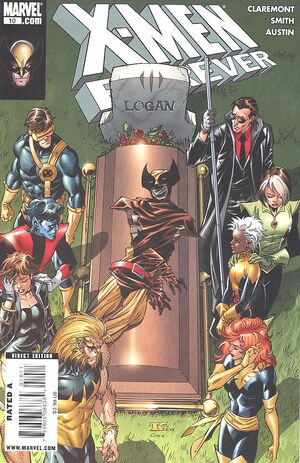 Knowing Logan... wasn't easy. He was the best there was at what he did...but what he did best wasn't very nice. Certainly not what anyone would expect from a super hero. Then again, I don't think that's a term he ever felt applied to him. He was a man who lived his life, did his job, made no apologies. Because none were ever needed.

Appearing in "Home, Come the Heroes!"Edit

Synopsis for "Home, Come the Heroes!"Edit

As the X-Men prepare for Wolverine's funeral, Sabretooth and Remy. During the ensuing struggle, Cyclops and Kitty Pryde. The New Mutants and part of the Fantastic Four arrive at the funeral. Meanwhile, in the COSA satellite above earth, the Consortium and discusses how they should handle the X-Men. Beast monitors their satellite and leaves to attend the funeral, where Cyclops offers a few words on Wolverine's achievements in life. After the procession, Cyclops travels to Alaska where he visits his family.

Retrieved from "https://heykidscomics.fandom.com/wiki/X-Men_Forever_Vol_2_10?oldid=1469824"
Community content is available under CC-BY-SA unless otherwise noted.