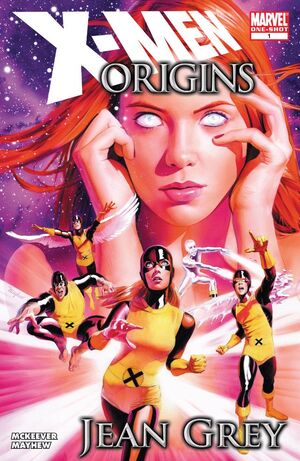 This is only the first step on a long and difficult journey.

Professor Charles Xavier visits the Grey household at Annandale-on-Hudson to speak to them about their disturbed daughter Jean. Jean recently developed mutant psychic abilities, but through the most traumatic circumstances. She was present when her friend Annie Richardson had been struck by a vehicle and killed. Jean telepathically felt Annie dying inside her brain. Now, she cannot keep the voices out of her head. Xavier explains the nature of Jean's mutant heritage to her parents and offers to help her any way he can. After spending a considerable amount of time with Jean, he decides to erect psychic dampers inside her brain, preventing her from perceiving the surface thoughts of those around her.

Time passes and Xavier visits the Grey home once again. He tells them he is opening up a boarding school for mutants and invites Jean to become one of his students. Jean accepts and becomes one of Xavier's X-Men. She trains with them consistently and earns the admiration of her fellow students. At this time, Jean develops the power of telekinesis.

When a mutant menace threatens Cape Citadel, the X-Men scramble in response. Jean however, does not go with them. Instead, she takes a walk through nearby Salem Center where she is forced to use her telekinesis to rescue people from a traffic accident. Xavier collects her after the Cape Citadel mission and admonishes her for ducking out on the team. However, he is proud to see Jean coming into her own.

Retrieved from "https://heykidscomics.fandom.com/wiki/X-Men_Origins:_Jean_Grey_Vol_1_1?oldid=1469870"
Community content is available under CC-BY-SA unless otherwise noted.