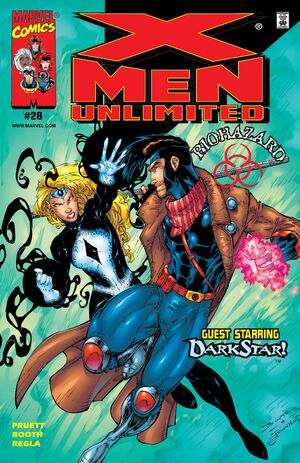 Appearing in "A Plague Among Us"Edit

Synopsis for "A Plague Among Us"Edit

Deadpool takes a cab from Times Square out to Fort Lee, New Jersey and reflects on a job he did three years ago.

He recalls how he rescued her from a kidnapping attempt/robbery which went horribly awry and involved her family members. After the job, Deadpool kept the money from the robbery and took Sandee to a psychiatric center, where she soon killed herself. Deadpool recalls how he handled all of the funeral arrangements, and as he arrives at Sandee's gravesite with a shovel to exhume her body and claim the money he hid with her, he muses about their family connection.