Start a Wiki
Part of the 'Factor Three (Event)' event 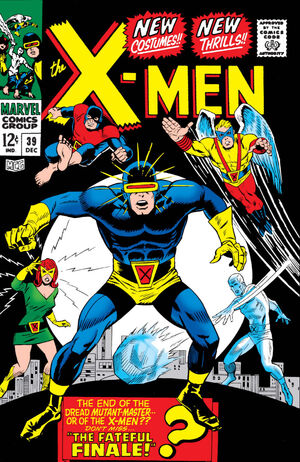 Appearing in "The Fateful Finale!"Edit

Synopsis for "The Fateful Finale!"Edit

Synopsis for "Lonely are the Hunted!"Edit

The fearful Scott Summers flees from an angry mob after his uncontrollable optic blast accidentally knocked loose an air conditioning unit from a crane, even though he then used his optic blasts to save them. Realizing that he can't go back the orphanage where he's grown up, young Scott decides to leave town by hitching a ride on a freight train.

In Washington D.C., the FBI and their mutant expert Professor Xavier learn of the incident and are interested in recruiting Scott into Xavier's school for mutants. Learning his identity, they learn that he had disappeared from the orphanage where he's lived most of his life. Learning of an optometrist who first suspected Scott was a mutant, Professor Xavier travels to visit the man and learn that he came up with the idea of using ruby quartz to control Scott's uncontrollable optic blasts.

Meanwhile, Scott had decided to get off the rails for fear of getting caught. Hungry, he follows the scent of someone cooking food and finds a group of hobos that are preparing a meal over a fire. Initially invited to join them, when Scott tells them that he's been hitching a ride on the rails, the homeless men think he's playing a college initiation prank on them and attack him. Hearing the commotion, a group of police officers chase the hobos away and help Scott to his feet. Realizing the boy fits the description of the missing person report they have, one of the officers attempts to take off Scott's glasses to get a better look at him, unleashing Scott's optic blasts and sending the officers fleeing.

Recovering his glasses, Scott flees into the woods and suddenly finds himself drawn by mental commands coming from a nearby cabin. Following them he is welcome by a man who claims to be a mutant as well. This man however, intends to use his powers to rule over humanity.

Retrieved from "https://heykidscomics.fandom.com/wiki/X-Men_Vol_1_39?oldid=1630105"
Community content is available under CC-BY-SA unless otherwise noted.