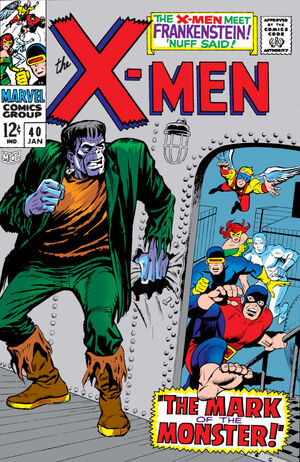 Appearing in "The Mark of the Monster!"Edit

Synopsis for "The Mark of the Monster!"Edit

Synopsis for "The First Evil Mutant!"Edit

Young Scott Summers has been lured to the home of Jack Winters, a mutant with incredible mental powers, who intends to use him to rule over mankind. With the police seeking out Scott, Winters uses his mental powers to teleport them away. While they manage to elude the police, they do not escape the notice of Professor X as their travels are picked up by his prototype mutant detector Cyberno, however the signal is lost before the Professor can pinpoint it.

Jack and Scott are teleported to a nearby nuclear plant where he intends to use the nuclear energy in the plant to boost his powers. Jack explains to Scott that one night not long ago, he broke into a chemical lab to steal something of value so that he can pay off his gambling debts, when grabbing a beaker of radioactive material it exploded in his hands. Surviving and considered lucky to be alive, Jack was released from the hospital where he found that the explosion activated his latent mutant abilities endowing him with mental powers and another power to his damaged hands. Finishing his story, Jack reveals that the explosion had turned his hands into diamond.

Rechristening himself Jack O'Diamonds, Jack theorizes that a greater exposure to radiation would turn the rest of his body into diamond as well. Before they can go further, they are approached by Charles Xavier who warns them to cease their criminal activities with his mental powers. Jack orders Scott to kill the Professor with his optic blasts, but the frightened boy cannot bring himself to kill another with his mutant powers.

Calling the boy a coward, Winters decides to tackle Xavier on his own, pitting his mental powers against that of Xavier. This story is continued next issue...

Retrieved from "https://heykidscomics.fandom.com/wiki/X-Men_Vol_1_40?oldid=1630107"
Community content is available under CC-BY-SA unless otherwise noted.