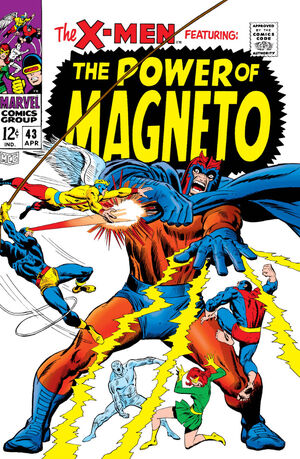 Appearing in "The Torch is Passed...!"Edit

Synopsis for "The Torch is Passed...!"Edit

With the kind of press the X-Men get, though, the papers'll probably report it was halted by Iron Man's Repulsor Rays!

A back-up narrative explaining Cyclops' mutant powers. Cyclops is endowed with a powerful optic blast that he cannot control and must use his ruby quartz glasses to prevent them from firing. It explains that his powers derive it's energy from the sun.

It goes on to explain the application of Cyclops' visor, how it is controlled by a nob on the side of the visor or from a secret glove trigger that Cyclops can use when his hands are bound. It explains the force that his powers can strike with and it also explains how Cyclops is a trained fighter. The narrative ends by posing the question of if Cyclops' power is strong enough to face the Hulk.

Retrieved from "https://heykidscomics.fandom.com/wiki/X-Men_Vol_1_43?oldid=1768716"
Community content is available under CC-BY-SA unless otherwise noted.