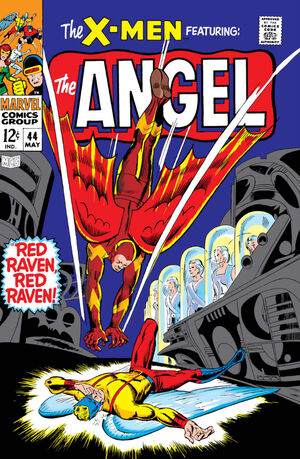 Synopsis for "The Iceman Cometh!"Edit

What in...He covered Rock with snow! He just tossed it from his hand! I don't know how he did it--but I aint stickin' around to find out!

Continuing with the origins of the X-Men, our story begins with a young Bobby Drake taking his girlfriend Judy Harmon out on a date. It is interrupted when they are jumped by Rocky Beasely and his goons who have come to pick a fight with Bobby whom Rocky is competing with for Judy's affections.

With Bobby being roughed up by Rocky's friends, Rocky forcibly pulls Judy away, however he is stopped cold, literally, when Bobby's ice powers accidentally trap Rocky in a case of ice. The display not only scares off Rocky's goons, but Judy is also scared of Bobby and flees. When the news of Bobby's mutant powers quickly spreads across the town, the people begin to form a mob. Rushing home, Bobby tells his accepting parents that he accidentally used his powers in public.

When the mob reaches their home, Bobby's father attempts to talk sense into the crowd, but they force their way into the Drake home. With no other choice, Bobby is forced to defend himself by using his ice powers against them. However, he is easily overpowered and taken to the county jail.

Reading about the incident, the Professor decides to recruit Bobby Drake as his next student and sends Cyclops to go and retrieve the boy. Bobby meanwhile is sitting in a Nassau County jail cell pondering the prejudice that he is dealing with when suddenly the wall to his cell is blasted open.

Retrieved from "https://heykidscomics.fandom.com/wiki/X-Men_Vol_1_44?oldid=1719454"
Community content is available under CC-BY-SA unless otherwise noted.