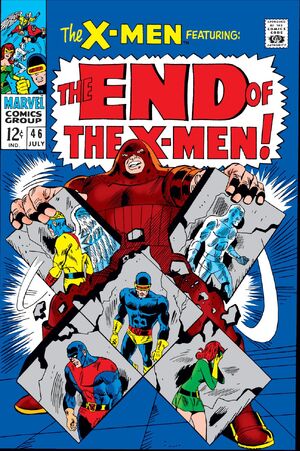 Appearing in "The End of the X-Men!"Edit

Synopsis for "The End of the X-Men!"Edit

Synopsis for "...And Then There Were Two"Edit

Scott, today we say goodbye to the X-Man--And begin the era of The X-Men!
— Professor X

A lynch mob has taken the young Bobby Drake and Cyclops hostage following Cyke's failed attempt to spring Bobby out of jail after he used his mutant powers to defend himself from a school bully. However, before the lynching can begin, the sheriff attempts to assert some sort of control, not standing to have frontier justice be played out in his town. Branded a mutie lover by the mob, the sheriff is dragged away while Cyclops and Bobby are taken to a hanging tree.

Rushing to the scene, Professor Xavier uses his mental powers to contact Scott and order him to free Bobby and make an escape. Using his optic blast to snap the noose around Bobby's neck, Cyclops and Bobby fight off the mob and flee. Although the mob follows after them they suddenly stop when the Professor uses his mental powers to erase their memories of the whole episode.

Returning to Bobby's home, the Professor explains what has happened and in a meeting with Bobby and his parents, he offers Bobby a place in his School for Gifted Youngsters so that he might learn to control his powers and also fight for human/mutant coexistence, an offer which Bobby accepts. This is how Bobby Drake joins the X-Men as the Iceman.

Retrieved from "https://heykidscomics.fandom.com/wiki/X-Men_Vol_1_46?oldid=1642458"
Community content is available under CC-BY-SA unless otherwise noted.