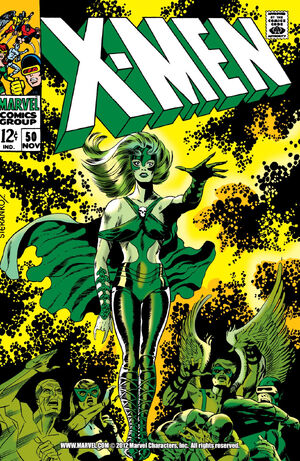 Appearing in "City of Mutants"Edit

Synopsis for "City of Mutants"Edit

Synopsis for "This Boy -- This Bombshell!"Edit

I hope Lady Luck is among the pulsating patrons of today's game!
— Hank

The young Hank McCoy is raised by his parents Norton and Edna McCoy, who find that raising a mutant child with superior strength and agility is difficult, but they still raise a well rounded boy. Reaching his high school years, the academic Hank is pressured by the football captain to kick a ball, trying to show his team that a lowly freshman can play better football than them. To everyone's surprise, Hank's mutant nature makes him adept at playing football and he's soon invited to join the team. Hank does and becomes a football sensation.

During one of his games, the box office is robbed by a gang of crooks who try to steal the money from ticket sales. Witnessing the robbery, Hank uses his mutant abilities to knock out all the crooks, his daring actions are televised on national television, attracting the attention of a costumed villain known as the Conquistador, who seeks to exploit Hank for his own criminal ends.

Retrieved from "https://heykidscomics.fandom.com/wiki/X-Men_Vol_1_50?oldid=1630124"
Community content is available under CC-BY-SA unless otherwise noted.