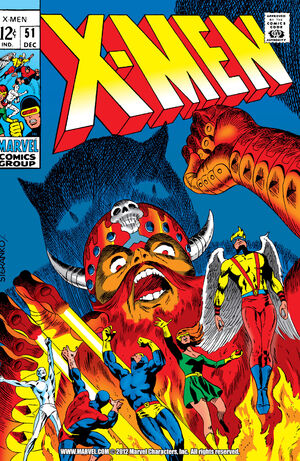 Appearing in "The Devil Had a Daughter!"Edit

Synopsis for "The Devil Had a Daughter!"Edit

Synopsis for "The Lure of the Beast-Nappers!"Edit

Sending out his agents to capture the lad, one soldier attempts to run him down, however Hank manages to jump out of the way of his oncoming path. However, Hank lands near a number of the Conquistador's troops whom he manages to fight off. The Conquistador, however, arrives to personally deal with Hank by using his sword which fires a powerful electrical jolt that knocks Hank out.

Having heard of Hank's mutant nature, Professor Xavier sends Iceman to go and offer Hank membership in the X-Men, however, he finds that Hank's home is empty and there is evidence of a struggle. Reporting back to the Professor, Charles is left to ponder what may have transpired.

When Hank awakens sometime later in the secret base of the Conquistador, his captor offers him an ultimatum, aid in the Conquistador's plan of global domination, or his parents will die.

Retrieved from "https://heykidscomics.fandom.com/wiki/X-Men_Vol_1_51?oldid=1630125"
Community content is available under CC-BY-SA unless otherwise noted.