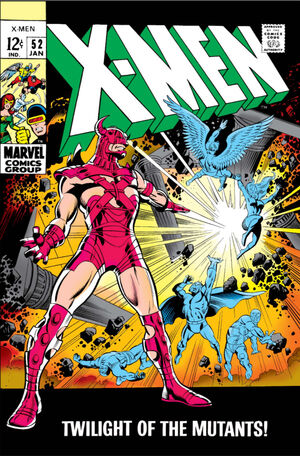 Appearing in "Twilight of the Mutants!"Edit

Synopsis for "Twilight of the Mutants!"Edit

Synopsis for "The Crimes of the Conquistador!"Edit

Henry McCoy has been captured by the Conquistador who wishes to exploit the mutant for his plans for world domination. To insure Hank's compliance, the Conquistador has captured Hank's parents and threatens to kill them if Hank should refuse to help.

Seeking to recruit Hank into his school for mutants, the Professor sends Iceman to visit with the young mutant but they learn that Hank and his parents have gone missing. The Professor goes to his study where he operates his first version of Cerebro to try and track down the McCoy family. Locating them, he orders Cyclops, Angel and Iceman to get ready for action.

The Conquistador meanwhile, has forced Hank to use his powers to break into a government facility to steal an experimental new nuclear reactor. Hank succeeds in his task, but still manages to set off the alarm; however he manages to escape thanks to his mutant abilities. Giving the reactor to the Conquistador, Hank asks if he and his family can be set free. The Conquistador strikes Hank and tells him that he will only be allowed to go once he is no longer useful to the Conquistador's cause.

Retrieved from "https://heykidscomics.fandom.com/wiki/X-Men_Vol_1_52?oldid=1719462"
Community content is available under CC-BY-SA unless otherwise noted.