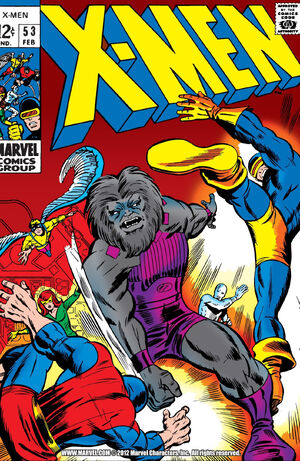 Appearing in "The Rage of Blastaar!"Edit

Synopsis for "The Rage of Blastaar!"Edit

Synopsis for "Welcome to the Club, Beast!"Edit

The Conquistador has his operative Chico install the energy generator which he forced Hank McCoy to steal for him to power his doomsday weapon for which he plans on threatening the entire world. When Hank revives from a previous blow dealt to him by the Conquistador, he attempts to attack his captor, however he bounces off his electrified shield.

Dodging blasts from the Conquistador's electrified sword, Hank tries to escape the room but ends up running into a door closed by Chico. Before the Conquistador can punish Hank; Cyclops, Angel and Iceman burst through the door to rescue him. With Hank's help, the three costumed mutants manage to fight off the Conquistador's men.

Before they can stop the Conquistador from activating his device, the mutants are ordered to retreat by the Professor. Just as they do, the Conquistador's device explodes seemingly killing him. Outside, the Professor meets with his charges and explains that he used his mental powers to overload the weapon. Returning to the McCoy house, the Professor asks Hank to join his school, an offer that Hank accepts. Dawning his costume, the group welcomes him to the team and rechristens him the Beast.

Retrieved from "https://heykidscomics.fandom.com/wiki/X-Men_Vol_1_53?oldid=1630128"
Community content is available under CC-BY-SA unless otherwise noted.