Start a Wiki
Part of the 'Eve of Destruction' event 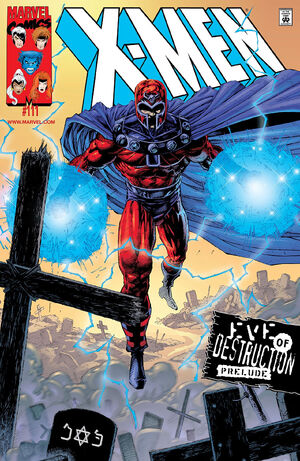 Appearing in "Prelude to Destruction"Edit

Synopsis for "Prelude to Destruction"Edit

Trish Tilby reports for BNBC from Genosha as the people of Genosha gather in Magda Square to await an address by Magneto. She recounts the events of the Genoshan Civil War, the Legacy Virus and Magneto's rise to power after the detention of infected mutates. The report includes statements from several contributors: Genoshan health minister Jared Barthmounte originally reacting to the Legacy virus with apathy; Sharon Carter on S.H.I.E.L.D.'s choice not to involve themselves pre-emptively; Dr. Hank McCoy on the cure for the virus and its origin; Captain America, interviewed by Simon Westphal for BNBC, on the Avengers' choice not to become involved until necessary; Sabra from Tel Aviv stating her belief that Magneto should be killed; and Joanna Cargill at the UN, in her capacity as Genoshan ambassador to the US, instructing companies to surrender to Magneto's rule.

Professor Xavier is watching the broadcast as Trilby goes on to mention the discovery of Quicksilver aboard the Russian frigate Botski's Dream, after S.H.I.E.L.D. believed him to be a freedom fighter in Genosha, attempting to overcome his father. Trish then cuts to the Genoshan throne room for Magneto's address. He declares that to avoid repetitions of humanity's past crimes against those different from others, he must put humanity out of its misery. Trilby questions his logic in perpetrating these same crimes himself and says that this will be Magneto's last word before a rally the next day, for which sources claim he is securing a symbol around which his troops can rally. Professor Xavier's room is now in disarray, the television still switched on, as Trish signs off.

Retrieved from "https://heykidscomics.fandom.com/wiki/X-Men_Vol_2_111?oldid=1493974"
Community content is available under CC-BY-SA unless otherwise noted.