Part of the 'Golgotha' story arc 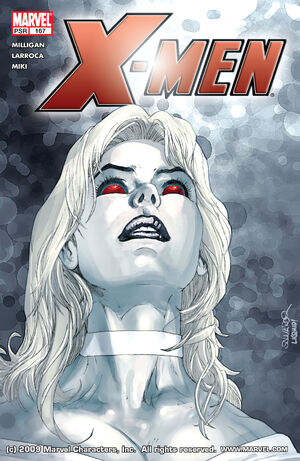 This thing wiped out a whole colony. I can't risk taking it back to civilization, let alone our home.

Appearing in "Golgotha (Part Two: The Night of the Mutant)"Edit

Synopsis for "Golgotha (Part Two: The Night of the Mutant)"Edit

The X-Men find Golgotha and debate whether or not to bring him back to the States. The White Queen wants to study him, but Havok thinks he is too dangerous, eventually Wolverine convinces them to compromise. Some of the X-Men comment about Polaris’ mental stability, while Iceman makes a joke about Gambit and Rogue not being able to touch - Gambit admits that it is getting to him, and later Rogue reveals that it is getting to her also. Some of the X-Men travel to Calvary, which turns out to be only one of several possible Calvary’s, but while there, Rogue and Gambit discover a small trinket shaped like the Golgotha they found in the South Pole. The White Queen hooks herself up to Cerebra and links to Golgotha - and suffers for it, as she is collapses while trying to leave and warn the others of something. Meanwhile, a mutant called Boy is let go by his rich human employers who used him as a servant. He recruits dozens of mutants in Los Angeles, and later they murder the rich family and their friends, leaving “Golgotha” scrawled on the wall in blood.

Retrieved from "https://heykidscomics.fandom.com/wiki/X-Men_Vol_2_167?oldid=1494024"
Community content is available under CC-BY-SA unless otherwise noted.