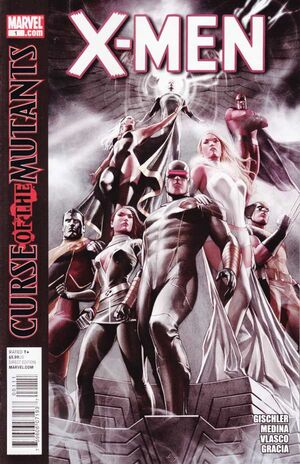 Appearing in "Curse of the Mutants, Part 1"Edit

“MUTANTS VERSUS VAMPIRES,” PART 1 When a suicide bomber strikes in downtown San Francisco, it gets the immediate attention of the X-Men. But this is not your garden variety terrorist – and he’s not acting alone. Vampires from around the globe are descending en masse on the City by the Bay, staking a brutal claim for the patch of land the X-Men call their home. What is their agenda? Who is their mysterious leader? The X-Men are about to find out, as they brace themselves for a war of the species that will wrack the Marvel Universe.

Retrieved from "https://heykidscomics.fandom.com/wiki/X-Men_Vol_3_1?oldid=1755713"
Community content is available under CC-BY-SA unless otherwise noted.