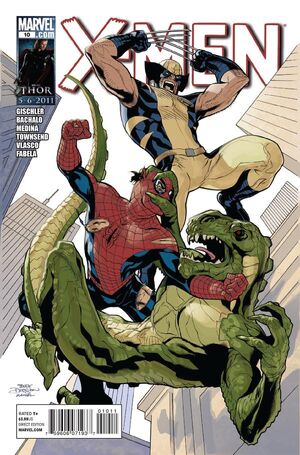 Appearing in "To Serve and Protect (Conclusion)"Edit

“TO SERVE AND PROTECT,” CONCLUSION The X-Men and Spider-Man have made their way through the New York City sewers only to be overwhelmed by a legion of bloodthirsty reptilian monsters. Now they’ve been captured and turned into mindless creatures themselves with only Spider-Man and Emma Frost left unscathed. Can this unlikely pair work together long enough to restore the X-Men and defeat their mysterious opponent? Or will they too join the ranks of the Lizard X-Men?

Retrieved from "https://heykidscomics.fandom.com/wiki/X-Men_Vol_3_10?oldid=1747856"
Community content is available under CC-BY-SA unless otherwise noted.