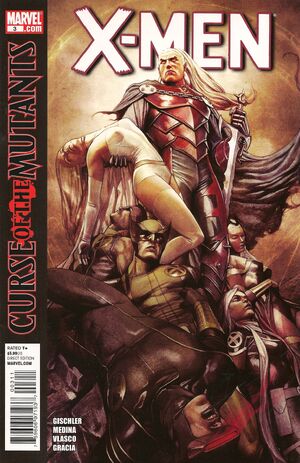 Appearing in "Curse of the Mutants (Part 3)"Edit

“MUTANTS VERSUS VAMPIRES,” PART 3 In a desperate bid to fend off an endless horde of vampires, the X-Men do the unthinkable: They resurrect Dracula. Will the former Lord of the Vampires go along with Cyclops’ scheme to take down Dracula’s upstart son, Xarus? Meanwhile, Wolverine sets off to rescue Jubilee, unaware of the chilling transformation she has undergone. To attempt to free his former teammate, Wolverine must embark down his darkest path yet.

Retrieved from "https://heykidscomics.fandom.com/wiki/X-Men_Vol_3_3?oldid=1649276"
Community content is available under CC-BY-SA unless otherwise noted.