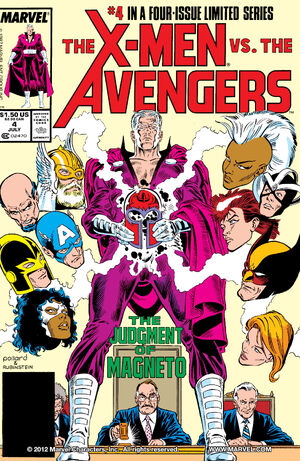 I was so concerned with the effects my death would have on mutantkind -- I never once considered how much my freedom would enrage mankind -- would increase their hatred and fear of us! Will this set off the war that I feared -- and sound the death knell of all mutantkind?! What have I done? What have I done?

Appearing in "Day of Judgment!"Edit

Synopsis for "Day of Judgment!"Edit

Retrieved from "https://heykidscomics.fandom.com/wiki/X-Men_vs_Avengers_Vol_1_4?oldid=1470198"
Community content is available under CC-BY-SA unless otherwise noted.