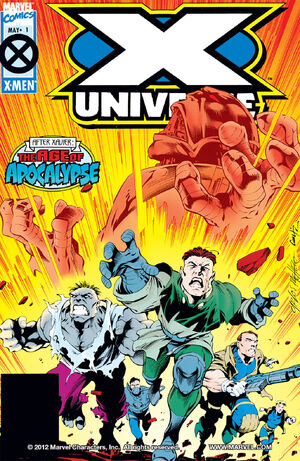 Gwen Stacy cared for the sick and starving while remembering how Wakanda used to be. The Marauders arrive, killing a small group of the people with their arrival. Osborne (Red), Fisk (Dirigible), Arcade, and The Owl were about to kill Gwen when the Stark Cargo Transport arrived, dropping medical supplies, fresh water, clothing, meal rations, tents, and more right on the Marauders.

With Clint Barton driving and Tony Stark as Captain, they finished the job by going after the two 'rauders they missed, the Owl and Osborne. Once the remaining Marauders were dead and gone, the ship landed and finished distributing the supplies.

As Stark tried to enchant Stacy with his charm, Doctor Donald Blake came in, and Stark told him he was needed back in England.

In England, the full Mutant Armada filled the skies with hope as Mikhail, the forgotten horseman of Apocalypse, arrived as humanity's last hope for salvation. Susan Storm and Benjamin Grimm don't fully trust their new savior.

On the flagship, Murdock informed Mikhail that the Zeppelins surrounding them were armed to the teeth with nuclear weapons. Mikhail claimed to already have known about it.

Just as Ben and Sue were about to land, they got an abort call on the radio and an explosion blew up the runway. They got out to investigate, and Ben was punched by a giant lurking Thing they mistook for a mutant. As he explained that he was going to survive with the mutants, Sue snuck up on him and shot him in the back of the head. She was thrown clear, and once Ben recovered her, they went to look for Doctor Banner, the person they set out to find.

Back at Buckingham Raze, Victor von Doom greeted Prelate Mikhail alone. As Mikhail gave his speech about peace, the people below cheered and chanted his name, hanging on his every word. Within the ship, Murdock looked over the various machines they had hooked up to Empath, watching them all redline as the mutant began to fade. The Prelate invited them all aboard his ship with promises of food and clothing, but just as Stark, Storm, Grimm, and company came on board, the doors shut, and the crowd went into a frenzy behind them.

On the ship, Mikhail revealed that he was using Empath to make the humans kill each other, and he was thrilled to have the last leaders of the Human High Council within his grasp. Ben implied that it was no coincidence.

Tactical Map
Add a photo to this gallery

Retrieved from "https://heykidscomics.fandom.com/wiki/X-Universe_Vol_1_1?oldid=1558436"
Community content is available under CC-BY-SA unless otherwise noted.