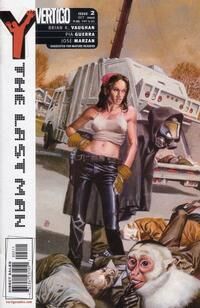 Oh, crap. I... I met this scary bring-out-your-dead chick today. She must have followed me.

Two months after the events from last issue:


Yorick and Ampersand have been traveling by foot to Washington, D.C. Recognizing that the two of them are the last mammals on Earth to carry a Y chromosome, Yorick decides to disguise his features by wearing a hooded cloak and a gas mask. Along his journey he meets a young woman driving a sanitation truck. She is collecting the bodies of the dead that have been littering the streets and bringing them to a crematorium at RFK. Due to Ampersand's shenanigans, Yorick loses his mask and the woman is startled to see a living man. Rather than feeling compassion however, she places him in handcuffs with the intent of bartering him to a radical feminist organization known as the Daughters of the Amazon.

Meanwhile, Agent 355, having returned to the United States, goes to the home of Secretary of Agriculture Margaret Valentine. It is her duty to inform Ms. Valentine that through the Constitutional rites of succession, she is now the President of the United States.

Yorick in the meantime, uses his own unique skills to escape from the handcuffs and run away from the mercenary trash woman. He finally manages to get to the White House and reunited with his mother. Congresswoman Jennifer Brown is overjoyed to see that Yorick is still alive, but also has to tell him that his father is dead. Yorick had been hoping that whatever mysterious factor that enabled him and Ampersand to survive might have saved his father as well.

Without warning, the windows of Jennifer's open explode inward and glass and debris fly everywhere. Jennifer and Yorick as the sounds of gunfire can be heard from outside.

Retrieved from "https://heykidscomics.fandom.com/wiki/Y:_The_Last_Man_Vol_1_2?oldid=1470860"
Community content is available under CC-BY-SA unless otherwise noted.