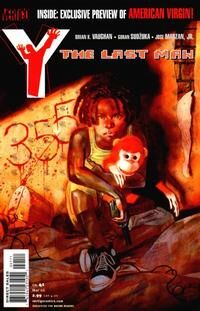 This story relates the last time Agent 355 saw the previous Agent 355 alive was when she was attempting to assassinate a VIP (heavily hinted to be former President William Jefferson Clinton) that Agent 355 had been assigned to protect. She ends up tearing out her former trainer's throat with her teeth.

Retrieved from "https://heykidscomics.fandom.com/wiki/Y:_The_Last_Man_Vol_1_41?oldid=1470176"
Community content is available under CC-BY-SA unless otherwise noted.