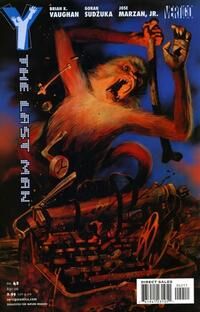 Toyota captures Ampersand and puts him on a boat back to her employer. He pees in her face and she loses her temper, so she takes up her sword to slice his tail off. She misses and cuts through his tether instead, so he hops out the porthole and escapes on the dock.

Retrieved from "https://heykidscomics.fandom.com/wiki/Y:_The_Last_Man_Vol_1_42?oldid=1470174"
Community content is available under CC-BY-SA unless otherwise noted.