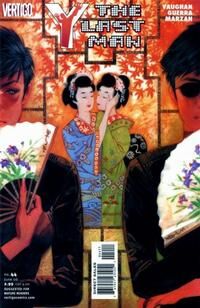 Ampersand has been acquired by Epiphany, a Canadian pop star who has become the new head of the Yakuza. She plans to cut off his penis in exchange for drugs.

Retrieved from "https://heykidscomics.fandom.com/wiki/Y:_The_Last_Man_Vol_1_44?oldid=1470171"
Community content is available under CC-BY-SA unless otherwise noted.